Have you ever tasted brown butter? Ahh it’s my most favorite thing ever! I could lick the pan… almost literally. Well it’s like my favorite so I make lots of things with it. And I thought I might share!

To start with today… since Kyrel and I don’t exactly love breakfast… I know I know. Ironic since I have chickens for eggs. When anyone asks me what my favorite way to eat eggs is, my reply is “In Cake!” haha but the point is, we don’t eat much for breakfast…. Most Sundays, we make German Pancakes! The one breakfast we like. Well I pretty much have the recipe memorized.

Personally, I use a blender to mix. When you mix it a little at a time in increments, it gives it a great fluffy texture… haha plus its easy to clean up…. And ya’ll know I like easy clean up! Just stick some water and soap in it and vuawala!

But that’s beside the point. Anyway… I can never remember the temperature of the oven. Which by the way is 400 degrees. So one Sunday I looked up a recipe on… yep. Pinterest. And this recipe also included a butter syrup. Which looked really yummy. And I was in the mood for a new pinterest adventure.

So I made it. But as I was sitting there waiting for the butter to melt I realized what would make it that much more delicious. I had just made brown butter cookies the other week so browned butter was on the mind I guess.

So I browned the ½ cup of butter. This is a process that takes a while. The best way to ensure browned and not burnt is low heat. I turn it on and just leave it to cook for a while. After a while tiny bubbles will start to form and you’ll see brown flakes rising to the surface. This is when you’ll want to watch it carefully as it can easily burn.

*By the way, start with a larger than you would think pan. It bubbles up lots at the end of the recipe. (And I am not joking about this…. at least twice as big)

Once I let it brown for a few minutes I add 1 cup of sugar… lets just face it right now. Nothing this delicious is healthy! Well not true I guess, but for today it is! Then you add ½ cup of buttermilk. Now lets pause and be honest. Am I ever prepared enough to have buttermilk just sitting in the fridge waiting for me to make this???? Good thing there is some saving grace for folks like me! Take half a cup of regular milk, and about a tablespoon of lemon juice. (vinegar also works) Let that sit for 15-20 minutes at least. This helps it curdle like buttermilk. (Plus its cheaper and you don’t get left overs with no idea what to do with them! Although my mother has an incredible buttermilk chocolate cake but that’s a story for another day.)

After adding the milk, bring it to a boil for one minute, then simmer for 7-10 minutes stirring occassionally. This helps incorporate all that yumminess and lets the sugar dissolve. Then for the final touches! Remove the pan from the heat and stir in 1 teaspoon of vanilla, and 1 teaspoon of baking soda. The soda will make it foam up. My favorite is to eat this while it is hot. But just store the leftovers in the fridge, and throw it in the microwave for a few seconds next time you want to use it!

Guys. This is truly delicious. I used to like nothing else except maple syrup on my german pancakes. I thought it would ruin them. Now I can’t imagine having anything but this! And it pairs beautifully with fruit!

First blend the eggs and make them fluffy. Then in parts add flour and milk, mix. Then more flour and milk, and mix. Doing them in increments help your pancakes be fluffy!

To start with, put the pan and about 3 tablespoons butter in the oven to melt. If you let it brown it makes it taste that much more amazing. 😉

While that melts go ahead and mix the eggs, milk, flour, and salt in a blender until well mixed and slightly foamy.

Then when the oven is hot and the butter is all melted pour the egg mixture into hot pan. It will start cooking so pour carefully but quickly. 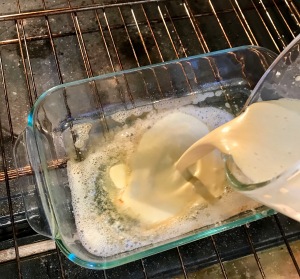 As it cooks it’ll puff up gorgeously! But careful if you open the oven. It falls easily.

Cook for about 20 minutes 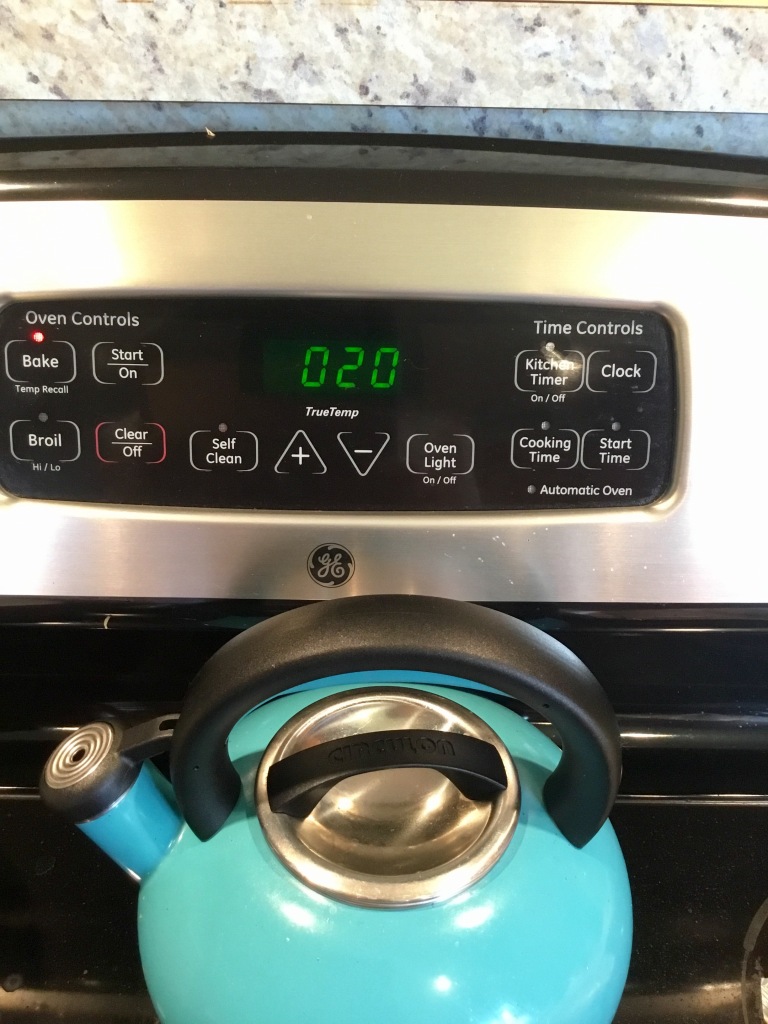 Here is a finished pancake. 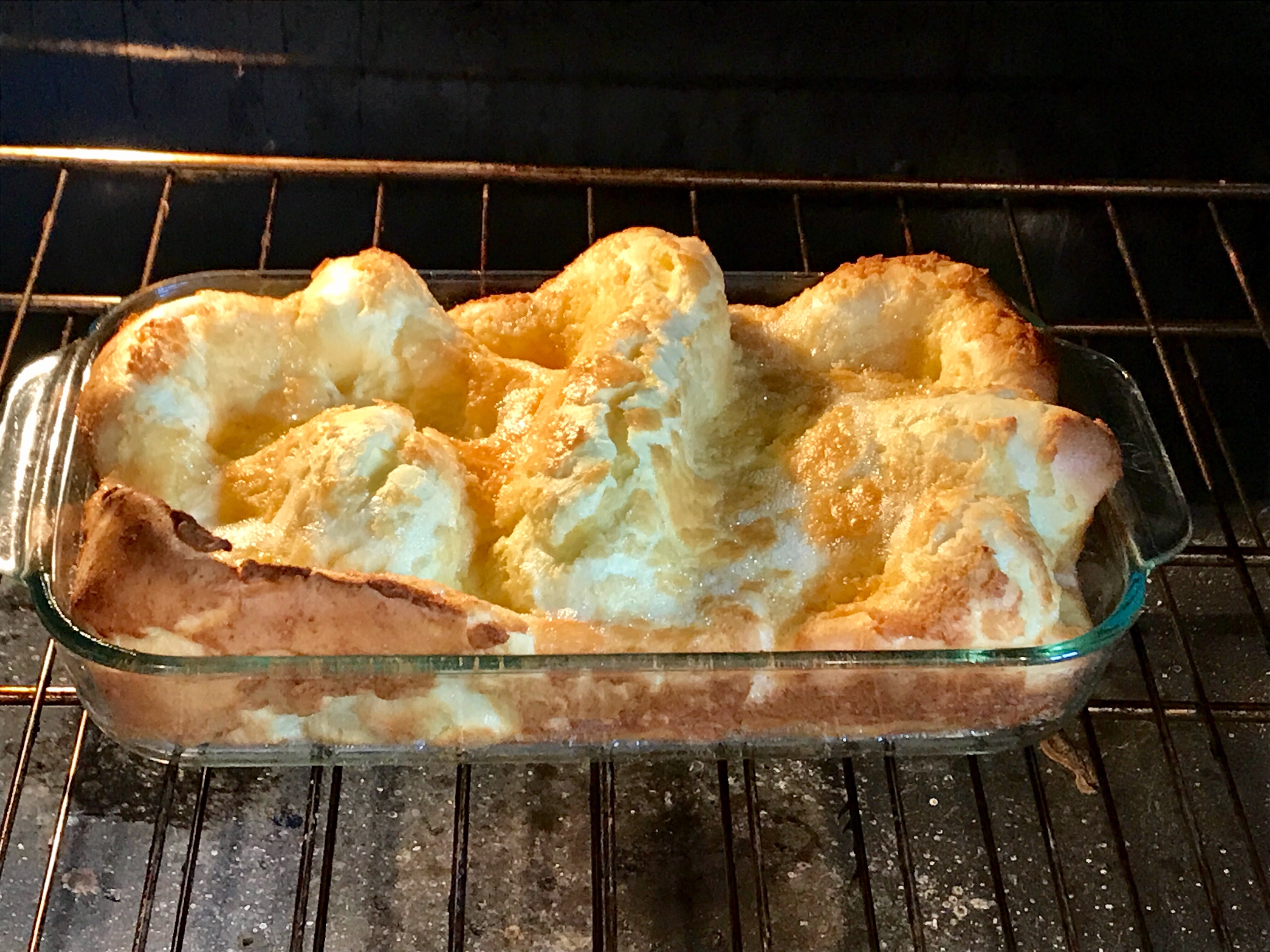 Enjoy! And thank you!

For Anyone who doesn't know us, I am Audra and I married Kyrel. We were highschool sweethearts... and eventually we ended up married. But that is a story for another day. We live in a small Idaho town, that is being taken over by a local college, or snow. Take your pick. Kyrel wants to be a farmer, and brings most of the farm home with him and dumps it on my floor when he walks in the door. He rarely sees a day that he does not end up in some mess, be it mud, gas, tar, or mechanic oil and grime. I am in school to become an Elementary teacher. I like to spend my time playing with my baby, cleaning, or attempting to make a new recipe or DYI. Thats pretty much the story of our life. Thanks for getting to know us, and I hope you stick around! View all posts by Audra